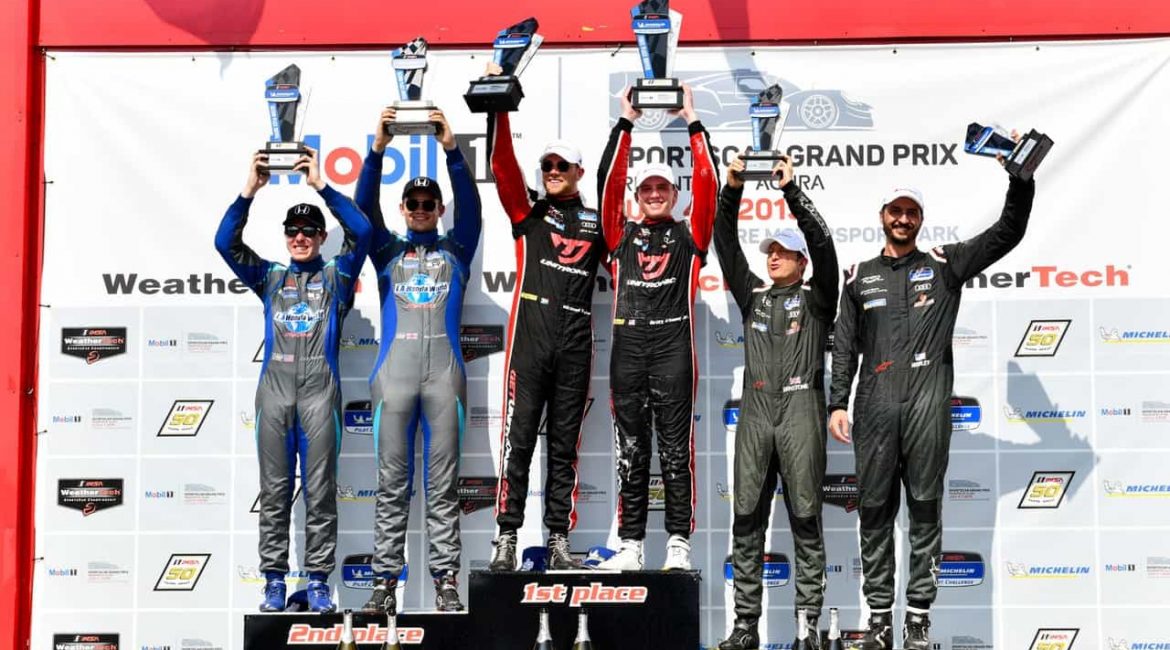 JDC-Miller Motorsport drivers Taylor and Casey recover from going one lap down to take a last gasp victory at home for title partner Unitronic and Out There Brands.

Taylor qualified the Unitronic No.17 Audi RS 3 LMS on pole with a lap time of 1.23.975. Five tenths of a second clear of the next TCR competitor, and an astonishing seventh overall out of a field of 38 cars.

The race started out just as planned with Taylor stretching out a multi second lead and maintaining it for his lengthy 1 hour and 10 minute stint. Bringing the car into the pit lane 11 seconds clear of the next TCR car on track. During the driver change the duo experienced multiple issues, including the fire bottle going off inside the car covering the interior with the powdered substance, making it extremely difficult for Casey to see as he left the pit box and drove over some pit equipment resulting in a drive through penalty. “It was like a calamity of errors during our stop, and we’re definitely going to need to work on them. First I came in a little past the marks, then the fire bottle went off inside the car, so we were distracted and forgot to plug in Britt’s radio, and lastly we didn’t move the tire out of the way out, so Britt got a drive through for running over equipment. I thought it was all over for us then.” said Taylor.

With 45 minutes remaining, Casey was able to drive the car from one lap down in eighth position to fourth and knew he had the speed for a podium. After some close moments Casey hustled the car into a podium position. And as the final moments of the race ran down, Casey pulled off a daring move around the outside of turn two to take the lead from teammate Stephen Simpson who was conserving fuel and nursing much older tires. Coming across the line to take the victory pulling off one of the best comebacks in IMSA Michelin Pilot Challenge history! A fire retardant covered Casey had this to say after the race; “Canadian Tire Motorsports Park puts on some of the most intense racing we see all season and this year was no exception. The race had no shortage of excitement and being able to win at home for Unitronic and for Autobahn Country Club in their first professional race as our sponsor was an absolute privilege. The race for the win at the end was between the two JDC-Miller Motorsports Audi’s and that serves as a testament to how strong our outfit is this year. After putting so much effort into the weekend, I couldn’t be happier to walk away with the win.”

“It was one of the most exciting sports car races that I can remember, let alone living the experience from the pit box — what a rollercoaster. We’re incredibly proud of what our team has been able to accomplish this season; finishing our first two professional races on the podium is quite an achievement in itself, let alone coming back from a lap down, facing some adversity to earn the top step on the podium. The JDC-Miller Motorsports Team has done an excellent job with the No.17 to provide Britt and Mikey with an excellent package to go out and win races!” said John Staffi, Technical Director at Unitronic.

Next race up for the Unitronic No.17 Audi RS 3 LMS will be the ROAD AMERICA 120 in Elkhart Lake, WI which will be a home race for Britt Casey Jr, who will be looking to go one step better than his 2nd place finish at the same event last year.

About Out There Brands
OUT THERE BRANDS was founded by professional racing driver Michael Taylor, filling the void focusing on offering extremely personalized branding services to the motorsports industry, specializing in custom made paddock displays and motorsports apparel. Alongside these services, Out There Brands provides first-class hospitality and event management. Learn more about getting your brand out there at www.outtherebrands.com

About JDC-MILLER MOTORSPORTS
JDC-MILLER MOTORSPORTS is a world-class multiple championship winning sportscar racing team, with a total of 18 championships, 60 wins, 57 pole positions, and 195 podiums, most of which coming by way of their Prototype class programs running in the IMSA WeatherTech Sportscar Championship. Highlights include an Overall Win at the Six Hours at Watkins Glen in 2018, 2017 Winner Extreme Spirit Award, and 2017 Winner Jim Trueman Award, providing the team an automatic entry into the 2018 24 Hours of LeMans. Learn more at http://jdcmotorsport.com/teamJDC.htm

About Autobahn Country Club
Autobahn Country Club is a motorsports club with over 450 members. We are celebrating our 15th year in business and continue providing access to racing, driver development programs, karting and events for our members, clients and the general public. Autobahn is located 45miles from Downtown Chicago in Joliet, IL. Our 350 acre campus consists of a North Circuit of 1.5 miles in length, a South Circuit of 2.2 miles in length and both combine to form a 3.56 mile course, one of the largest in the US. The Club is also home to Kart Circuit Autobahn a 7/10ths mile championship Karting Facility, opening to the public in August. The Club also has the largest motorsports club real estate development in the country featuring Garage Mahals, Condo Garages, Rental Garages and Lots for sale. Two levels of memberships are available. For more info go to www.autobahncc.com

Copyright © Out There Brands. Designed and Powered by